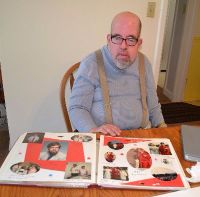 John Penney has a special gift for remembering dates.

“I can tell you all the presidents of the United States, when they were born, when they died,” says John.  “I know all of the vice-presidents, too!”

As you might expect, he’s pretty good at Trivial Pursuit – especially history-related questions.  While history isn’t always challenging for John, other things can be.

Born in 1967, John was diagnosed with cerebral palsy (CP) when he was about 18 months old.

“First thing I noticed he wasn’t using his left hand,” says his mother, Miriam.  “If he wanted a toy…he’d use his right hand.”

Miriam says doctors believed there was an interruption in blood supply to John early in her pregnancy.  Around the time of his CP diagnosis, he experienced his first epileptic seizure – something he still deals with several times a month.

At the age of 3, John began attending a preschool program operated by Richland Newhope (Richland County Board of Developmental Disabilities).  When he was 6, he became one of the first children with a developmental disability to attend a public school in Richland County.

“That was a proud day for me,” he recalls.

John tried living in a group home for about six years, but he eventually moved back to his parents’ house.  His father, Charles, just passed away in May.  His mom, who’s now 84, hopes John will be able to stay there once she’s gone.

“I would like John to remain here if that would work out with him having enough care,” says Miriam.  “They tell me there’s technology now that, even if he had a seizure, they could tell he needs help.”

She says technological changes aren’t the only ones she has seen in the developmental disabilities field since John was born 50 years ago.  And, according to Miriam, most of them have been good changes.

“The biggest thing, I think, is a good change is getting workers in the community,” she says.  “When John got out of high school, there really wasn’t community work available.  Now they’re really pushing for placement.”

John continues to be employed at RNI two days a week.  He also has an Individual Options (IO) waiver that provides some respite services or recreational opportunities in the community provided through HR Choices.

John loves going out to eat, spending time at Barnes and Noble, and listening to music from his collection of about 500 Christmas CDs.

His individual consultant, Angie Shaw, calls John a “neat guy” and says she enjoys working with the Pennys.

“John’s family has always encouraged him to take an active role when determining the services and supports that he wants in his life,” says Angie.  “He has no qualms about speaking his mind.  You definitely know how John feels about certain subjects!”

“I’m very grateful for Newhope and the services the government has provided,” Miriam adds.  “I don’t know what people did before.  I count my blessings every day that John was born at a time when we had Newhope.”