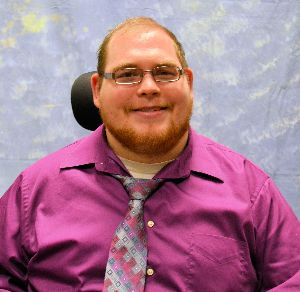 Your new DD Board members

The Richland County Board of Developmental Disabilities (RCBDD) welcomed two new members in January.  Nicolas Comstock and Amanda Chapman were appointed to four-year terms.  Both say they are excited for the new challenge.

Nick is a relatively new resident of Richland County, having moved here less than three years ago from northwest Indiana – just about 20 minutes outside of Chicago.  He attended a private Christian school, receiving a certificate of attendance in 2009.  He also attended a bible college for one year.

He has five brothers, including his identical twin brother, Nathan.

“Let it be known I’m the better-looking one, and I am the older twin by one minute,” Nick exclaims.

He’s very proud that two of his brothers, Jordan and Jack, are serving in the military and that his parents, Lee and Teresa, are about to celebrate their 38th wedding anniversary.

Nick is currently active with the Best Buddies chapter at The Ohio State University-Mansfield, serving on its board and as the ‘buddy director’ in charge of planning and promoting their activities and events.  He also serves on Richland Newhope’s Human Rights Committee.

“Until I moved to Ohio, I really did not have the opportunity to be involved in my community, and now I am in the middle of my second year on the Human Rights Committee,” he says.  “Now that I am actually appointed to the (DD) Board, I am honored and humbled to serve the great folks of Richland County in this capacity.”

Nick is the first individual eligible for services to be appointed to the RCBDD in its 50-year history.

“I think my appointment to the Board shows that Richland County really values the thoughts and opinions of the folks that they serve,” says Nick.

Nick would like to see other county boards across Ohio and disability organizations across the United States make similar appointments.

In his new role, Nick hopes he can work to establish more transportation resources in Richland County – something that has been a constant struggle for him since he moved here.

“If you have a disability, let me assure you that your life is not over!” he adds.  “You may have to work a little harder to get where you want to be in life but, trust me, it is all worth it.”

Amanda is a Mansfield native and 1994 graduate of Mansfield Senior.  She holds degrees in Public Relations and Sports Administration from the University of Toledo, is a licensed title agent, and is employed as the manager of Mohican Valley Title Agency.

Amanda and her husband, Jason, have been married for 13 years and have one son, Davis, and two rescue dogs named Squeaky and Sprite.  Most of her extended family live in the Mansfield area and spending time with them is one of her favorite things to do.

With family being the most important thing to her, Amanda says she appreciates the support they’ve received from Richland Newhope/RCBDD.

“I was interested in serving on the DD Board because I feel that Richland Newhope has provided my family with many opportunities via Early Intervention, Help Me Grow, and preschool,” she says.  “I was hopeful for the chance to give back to an organization that I believe in.”

Amanda says that relationship dates back six years.  Davis attended preschool at Richland Newhope’s Early Childhood Center (ECC) where he received speech and occupational therapy.  Her son also participated in the extended school year program offered by the Therapy Department, and he was the last student to go through the center-based Early Intervention program at ECC.

Amanda is very active with the parent-teacher organization at Discovery School where Davis now attends.  She also volunteers her time for the Autism Awareness Walk-A-Thon, a local non-profit organization that supports Richland County families who have a family member with autism.

While already somewhat familiar with DD Board services, she’s ready to learn more.

“My goal as a board member is to hopefully learn all that Richland Newhope has to offer to families and individuals and to make sure those services are known and recognized by the parties that need them,” notes Amanda.

“I believe that my experiences with Richland Newhope, combined with my enthusiasm to help others, will make me a true asset to this board,” she adds.

« Back to News Releases
Copyright © 2021 Richland Newhope. All rights reserved.