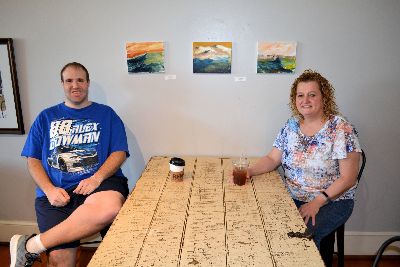 Not all of us are as fortunate as Vicki Thornsberry to find your life’s passion at the age of 14.  But that’s just what happened to Vicki when she began visiting a group home where her grandmother worked.

Within two years, while still in high school, she actually became employed at a group home on weekends.  After a couple of stints with Richland Newhope between other jobs, Vicki found her true calling in 2014.  That’s when she became an independent provider.

“I think that God just put me on this path,” says Vicki.  “You’re not making a lot of money but that’s okay and, when I go to bed at night, I sleep good and that’s all about it for me.”

Vicki says she cried when she learned she would be receiving an award for her efforts.

“I don’t set out to win awards,” she pointed out.  “It’s about these guys and to feel appreciated that much makes me feel…oh, I want to do it even more!”

The person who nominated Vicki for Richland Newhope’s Direct Support Professional award describes her as someone with a ‘caring heart’ and who “genuinely cares for and finds joy in the successes of individuals with disabilities.”

“Her contagious positive attitude and constant encouragement have made her clients feel good, confident, and important in their daily lives and activities,” the nominator added.

Currently, Vicki has 15 individuals on her caseload with whom she’ll spend one-on-one time with or in groups of up to four…doing everything from shopping and bowling to taking trips to places like New York City.

“Whatever idea they come up with, we figure out how to do it,” she says.  “One of my clients wanted to do sewing, so I got with Joann Fabrics and found out when they had classes and we went.  Now she goes by herself.  That’s what you work toward.”

Vicki, who grew up in the Clear Fork Valley and now lives in Lexington, says she also provides some respite and may explore a shared living arrangement in the future.  In addition, she’s also working with a retired sheriff’s deputy on developing a new curriculum to teach people with disabilities how to be safe in the community.

And that’s not all.  Vicki has been a Special Olympics coach for the past five years, she’s a local coordinator, and recently she became an area coordinator, replacing Donna Shank.

“It’s hard to actually get paid for what I do because I have so much fun,” she exclaims.

“She gives every individual a chance to have fun, be spontaneous, adventurous, and go new places,” said one parent.  “Her respect and patience for individuals with disabilities is something we should all strive for.”