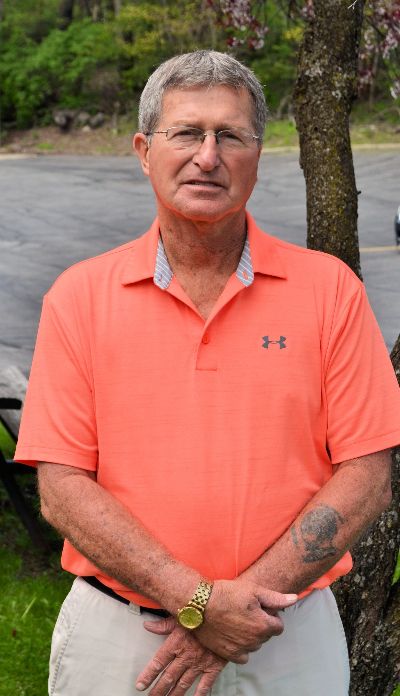 Volunteer experience impacts lives - including his own

For John Caugherty, becoming involved with Special Olympics was more than just a volunteer opportunity.  It was a calling.

“Really I think God gave me this job,” says John, who became a volunteer after his grandson, Austin Wells, began participating in Special Olympics about 14 years ago.

That almost wasn’t even possible.  That’s because John nearly died twice – once when he was shot during the Vietnam War in 1967 and again when he had a major heart attack at the age of 49.

“My wife said ‘God isn’t done with you yet’” he points out.

There were other trials in the life of this Richland County native.  His son died at the age of 6 months from hydrocephalus, which he blames on Agent Orange – an herbicide and defoliant chemical John was exposed to during the war.

Then, in 1996, Austin was born with Down syndrome.

Not long after Austin began competing in Special Olympics, John became an assistant coach for the school-age basketball team.  Four years later, in 2010, he became the head coach and served in that position until this past March.  During his tenure, his teams won three state championships in a row and finished as runner-up this past season.

John came to the job with plenty of coaching experience in the Lucas School District, including girls’ basketball and softball plus boys track.

But he says being a Special Olympics coach is the best job he has ever had.

“When I first started coaching, everybody on the team I wanted them to score at least one basket during the year,” he says.  “Everybody did every year.”

He also emphasized conditioning and designed plays for them to do during a game.  The first four years of coaching, John had 19 players.  The past two years there were 27 so he had two teams.

The person who nominated John for the Hero with Heart award noted he doesn’t just coach.

“He really tries to help these kids succeed in basketball, in school, and in life,” noted the nominator.

John would often transport players to and from practice and would sometimes take them out to eat after a game.  He hosted an annual pool party and cookout at his home for the players and their families and, about six years ago, one of the players actually lived with him for about three months due to a difficult family situation.

“It’s just not basketball,” John says.  “I want to make a better person out of them, too.”

John’s volunteer efforts don’t end there.  For several years, he organized a successful car show at the Richland Mall to raise money for Special Olympics.

And now, at the age of 71, John has decided to stop serving as the head basketball coach so he can spend part of the winter with his daughter in Florida.

“I’ll probably miss it, too, but that’s why I’m helping (with) track,” he explains.

Through the years, John has made many friends and impacted the lives of many individuals.  They’ve had an impact on him, too.

“All these kids made a better person out of me,” adds John.