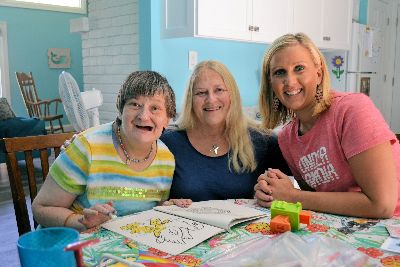 (Editor’s Note: The following is part of a series of stories about providers that Richland Newhope partners with to provide services for people with developmental disabilities in Richland County.)

Taking care of people is something Joan Schoenfelt has been doing almost her entire life.  You could say she was born into a life of service.

Joan is the owner/administrator of Marie’s Care Agency, a small provider agency based in Mansfield.  She was introduced to direct support care as a child.  Joan’s grandmother owned the former Griffith Nursing Home and her mother worked there.

“When my mom and dad got a divorce, mom built a house behind the nursing home and basically, if we wanted to see mom a lot, we had to go to the nursing home,” recalls Joan.

As a child, she would spend time at the nursing home, playing games and doing crafts with the residents.  At the age of 13, Joan became a nurse’s aide there.

After high school she tried various jobs at places like Cracker Barrel and Super X – none of them she really liked.

“I missed being with people, working with the individuals,” says Joan.

So in 1981, she began working at Richland Newhope where she spent 12 years at Raintree and Richland Newhope Industries, Inc.  About the same time, Joan’s mother started a provider agency called Schoenfelt Home.  Joan left Newhope in 1993 to work for her mom and then, in November of 2007, Joan took over the business and renamed it Marie’s Care Agency.

Today, she provides supports for about 10 people.  Three ladies live in the only group home her agency operates on Mansfield’s south side, including Mary, who has been with the Schoenfelt family for 37 years.

“Joanie is nice to me,” says Mary.

The rest of Joan’s clients receive services in their home or help with grocery shopping, appointments, or doing other activities in the community.

“To me…it just comes natural,” she says.  “How can you not do it?  You’ve just got to have the compassion for them, and I see them as family, like taking care of a family member.”

Joan averages about eight to 10 employees and admits finding and retaining competent staff is the biggest challenge she faces just like most providers.

She has definitely noticed a lot of changes in the developmental disabilities field over the years – changes she thinks have benefited the individuals she supports.

“They’ve got more community exposure, and it seems like the public is accepting them better than they did years ago,” Joan points out.  “Their disability shouldn’t stop them from doing anything.”

But it’s not only the individuals whose lives are better.

“Just seeing them happy and smiling and spending time with them is enough reward for me,” adds Joan.