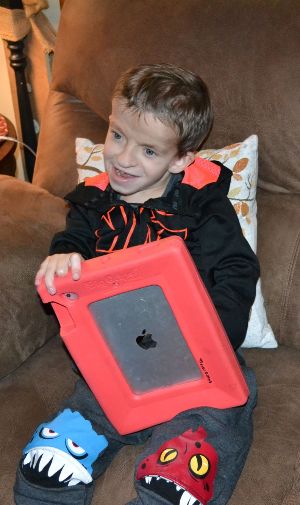 “It takes a village to raise a child” is an African proverb that holds true for Trevor Dillon.

This sweet, affectionate 9-year-old boy was born with many health challenges – challenges that would be difficult for any family to handle, but especially for parents who have their own personal struggles to face.

Trevor’s primary diagnosis is chromosome 5p duplication, which has led to heart defects and other health issues.  He has a pacemaker and a shunt in his head.  He’s fed through a g-tube.  He has epilepsy.  He has developmental delays.

Three years ago Trevor met Aaryn Hinklin, a home health nurse who works for Central Star Home Health.  At the time, Trevor was in foster care.  Over the next year, he would return home to his biological parents and back to foster care again.

“I would do his tube feedings and just monitor his weight and nutrition,” says Aaryn.  “He was barely sitting up on his own.”

Eventually, Trevor’s foster family – which already had five other children – decided they were unable to care for him because of his medical needs.

That’s when Aaryn stepped in.

“The foster family approached me about being able to take him myself, even though I’m not a foster parent, just because I was most closely bonded with him and there was no one else in the family able or willing to take him at that time,” says Aaryn.  “And he was going to go to a facility in Medina, and I just couldn’t see that.”

So two years ago Aaryn became Trevor’s legal, permanent guardian and he joined her family, which included five other children.  You might think it would be a difficult decision, but she says it really wasn’t.

“I prayed about it and I did speak with the kids at length about what it would involve because I didn’t want them to be upset,” she added.  “I felt it was just the right thing to do.”

“Since he’s come to live with us he has learned how to walk, which is not something he was doing,” noted Aaryn.  It’s also something doctors thought would never happen.

“One day he started kind of standing up and holding on to things just like a typical, growing younger child would,” she adds. “With all of the supports and all of his help through his therapists at Newhope and through school and family, he has learned how to walk.”

“Everybody is just amazed by it,” states Aaryn.  “It’s a lot of Trevor and his willingness to want to do all those things.”

Trevor, who is mostly non-verbal, is now a third-grader at Stingel Elementary.  He uses an iPad to communicate, but he can say some words.  Just ask him to count to five, and he’ll clearly repeat it over and over.  He also loves to swing and, in the past year, he learned to ride a bike.

“I’m so happy for him…it’s just awesome that he can get up and be independent,” Aaryn adds.

Trevor is currently receiving therapy services at the Nationwide Children’s Hospital facility in Mansfield, where he’s not only trying to tackle speech but is also learning to eat more than just baby food by mouth.

When he moved in with Aaryn’s family, Trevor weighed only 24 pounds.  He’s now up to 41 pounds, which is considered a good baseline weight.

Aaryn, whose first full-time job was at Richland Newhope Industries, Inc. (RNI, Inc.), continues to be the one to provide 14 hours of skilled nursing ‘visits’ per week with Trevor, which are paid for by Medicaid.  He also receives case management services from Richland Newhope as well as some family resource funds that have help pay for things like a walker.

“Even with doctor’s appointments and ordering supplies and getting things like his walker…I’ve had great support from his therapists and from his individual consultant,” says Aaryn.  “Everyone’s been wonderful.”

Trevor also maintains a relationship with his biological family, which includes a 12-year-old brother.

“His family loves him,” she points out.  “He’s a great kid, and I want him to maintain a relationship.”

His new family loves him, too.

“Trevor is one of the happiest people you’ll ever meet in your whole life,” says Aaryn.  “He’s always laughing, always is smiling even with everything that he has had to overcome physically and emotionally probably that in some ways we don’t know.”

A boy described as a little miracle is now thriving thanks to the village that has helped him along the way.