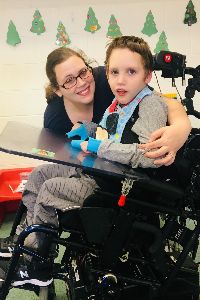 Fond farewell to a friend

Hudson Budd is embarking on a new adventure, but it’s bittersweet for Richland Newhope employees who have served the youngster since he was born six years ago.

Hudson first came to us as an infant after he was diagnosed with cerebral palsy.  Help Me Grow and Early Intervention staff served Hudson and his family until he was 3-years-old when he transitioned to preschool at the Early Childhood Center.

Richland Newhope has provided educational and therapy supports as well as family resources for Hudson over the years, and that resulted in a close bond between his family and all of the employees who delivered those services.

Just two years ago, therapists were excited when they were able to help Hudson obtain a power chair that is operated by access switches so he could be more independent.  With lots of practice, he has gradually been able to use a faster speed and is learning to use eye gaze assistive technology that’s built into a communication device.  A camera calibrates to his eyes and allows him to look at icons on a screen to communicate.  This technology is very useful for those who don’t have adequate hand control to otherwise navigate a device.

Last year, after Hudson had surgery to repair his dislocated hips, his team helped him obtain a gait pacer.  It allows Hudson to stand and take steps with supports.  He’s all smiles when in the pacer!

Hudson has grown considerably and recently needed a car seat that fits his positioning needs, which includes a lot of head and body support for his four-foot-tall frame.

“I was stuffing pool noodles in his car seat to provide trunk and head control, and I had real safety concerns,” said his mother, Angie.

With the use of family resource dollars from Richland Newhope, Hudson was able to obtain a new car seat that meets his needs for now.  Angie says family resources has provided so many things over the years that insurance wouldn’t cover and the family otherwise could not afford – items such as an adapted swing, two sets of Benik hand splints to prevent bone deformities of his hands, a portable ramp to get his power chair in and out of a van, a positioning pillow for sleeping, a therapy wedge for tummy time to build his back and neck muscles, and a basic communication board.

But his time with Richland Newhope has come to an end.  Hudson and his family moved to Marion in March so his father doesn’t have to drive as far to get to work in Westerville.  They found a one level accessible home that’s affordable to rent compared to housing costs in Westerville.

Hudson now attends Hayes Elementary School as a kindergarten student where he is in a small classroom with just seven students.  Angie is transporting Hudson to school as she faithfully did when he attended Newhope’s preschool.

“To say we will miss Richland Newhope is an understatement,” said Angie. “Over the years his team of wonderful individuals has truly become part of our family…the way that they bend over backwards for any way to help Hudson and make him feel included while also making sure he continues to receive the adequate care, assistance, and equal opportunity to learn and play amongst his friends and peers at school.”

Saying goodbye hasn’t only been difficult for the Budd family, it has also been hard for all of the Newhope staff who has worked so closely with them over the years.

Best wishes Hudson in your new home and school!  We love you and welcome a visit anytime at the Early Childhood Center!