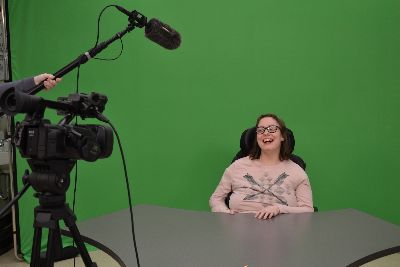 Madison High School’s Interactive Media class teaches students some of the finer aspects of broadcast journalism and uses YouTube to share reports about what’s happening in the school district.

But perhaps one of the most popular reports isn’t about Madison.  It’s about making the right food choices.

‘Healthy Hacks,’ as it’s called, is the brainchild of Irene Taylor, one of the students in the class.   Irene says she started the segment in hopes that she, too, could become healthier.

Irene, who has cerebral palsy, researches, edits, and records her reports each month with the help of her one-on-one aide.

“I had a student who was placed in my class who had autism last year,” says Instructor Greg Kahl.  “He was our weather guy. I would go to his class, and we would show the weather forecast every week and they loved it.”

As a result of that experience, Kahl partnered with the special education class to have other students do segments.  He says Irene stood out.

“She’s energetic,” says Kahl.  “Everybody knows who she is at school, and she has a personality that I just wanted to capture on camera.”

Irene says she decided to take Interactive Media after completing a keyboard course.  She’s in class every day second period and says it has really improved her computer skills.

“I was nervous when I got in this class,” she points out.

Now she enjoys the extra attention she gets for her reports and doesn’t even mind watching herself on YouTube.

Kahl says, when there’s a deadline, he can always count on Irene to have her script ready.

Other students in the class help record ‘Healthy Hacks’ and get it on YouTube, which is the home for WMAD, the Ram Nation Station.

“I think they’re awesome,” Kahl says.  “(They) have some of the most views on the YouTube channel.”

When Irene started doing the segments, she decided she needed an on-air name.  While Irene is her real first name, Taylor is not her last name. (Editor’s note – Irene asked that we not use her real last name for this story.)

“I want to protect it...for security,” she adds, after hearing her teacher comment that sometimes people use a different name to protect themselves from stalkers.

She ended up choosing the first name of her favorite singer – Taylor Swift – to be her ‘on-air’ last name.

Irene plans to take the Interactive Media class again next year.  She’d like to do another special segment, but she doesn’t know yet what the topic might be.

That’s okay with her teacher.

“What she does is just contagious and it’s energetic,” says Kahl.

Once she does graduate in 2021, Irene would like to find a job where she gets to interact a lot with other people.  She has already done some career exploration at Best Western, Texas Roadhouse, and Winchester Terrace.

In the meantime, check out ‘Healthy Hacks’ and other stories about the Madison Local Schools on their YouTube channel.